The Desert of the Tartars 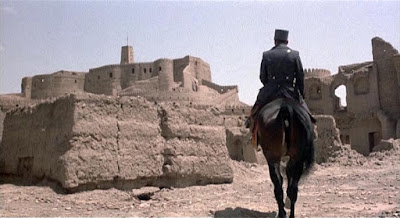 The young, handsome Drogo (Jacques Perrin), having just enlisted in the military, is assigned as a lieutenant at the distant outpost of Bastiani, which lies between a vast, empty desert and high, snow-capped mountains. This ancient fort's purpose is to mark a territorial border, but the enemy, the "North Kingdom," is almost forgotten, so quiet has this war become. As time passes and he gains stature within the ranks of the garrison, he learns of the subtle frictions between the officers, as well as the suicidal despair of the soldiers who serve under them, waiting constantly for a conflict that never happens. Yet there does seem to be something brewing out upon the desert horizon: Captain Hortiz (Max Von Sydow) claims to have once seen figures riding white horses--Tartar horses--though he is reluctant to speak of it now; soon Drogo and his companions sight a white, riderless horse trotting just beyond the border, and heated discussion arises as to whether or not they should go over the border (forbidden) to seize the horse, and whether or not it actually belongs to the enemy at all. If that enemy even exists.

Time passes, Drogo grows older, and his discreet attempts to find another station somewhere else are denied. The bureaucracy of the garrison leads to stupid, sometimes disastrous decisions: when one soldier doesn't know the password to gain re-admittance to the fort, he is shot down--as though he might be the enemy even though they can easily recognize that he isn't. Rumors of a possible Tartar invasion increase, as evidence mounts that the enemy is on the move; yet, somehow, it is justified to reduce the population of the fort and weaken it. The absurdities might sound like something out of Catch-22, but Valerio Zurlini's The Desert of the Tartars, based on the novel by Dino Buzzati (published in English as The Tartar Steppe), is more somber, with a premise, bordering on the allegorical, that calls to mind Kafka. As in Kafka's stories and novels, all actions lead to futility and frustration, with utter catastrophe constantly on the horizon.

Zurlini's film--his last--is beautifully photographed, with fine (if deliberately muted) acting, and an austere, slightly removed quality that calls to mind Visconti (in particular The Leopard and Senso) and Bertolucci (in particular The Conformist). It is austere, however, to a fault. While Zurlini might be serving the novel with the greatest respect, and certainly gets across the erosion of time (the film is 140 minutes) as well as the unidentifiable dread of the story's premise, the film could only be helped by a little auteurist kick in the pants. Imagine what Bunuel could have done with the material (never find the fetishes he would have imposed). Or Herzog (who probably would have hypnotized his cast). The problem with the film is that it hasn't the guts to push the film into the territory of real greatness--to lull the audience into the trance that the story requires and then really show them something, take them someplace. A little humor wouldn't hurt, either.

Yet the journey is worthwhile, and there are a few moments within the film that are stunningly imagined. When Drogo first arrives at Bastiani, riding alone on horseback, the camera pans slowly across the deserted, ancient fortress, which appears to be abandoned. He finds bayonets stuck into the ground, but no soldiers, all while the tower of the fortress looks magnificently, ominously down upon him from the background. Much is made of what can be seen from the tower through binoculars--the strange evidence of the unseen enemy--and Zurlini effectively puts across the idea that to look through them is to confront one's fears and paranoias. When Drogo, late in the film, collapses in a faint when he attempts to look through his pair, it is perhaps the most strange and shocking moment in the picture.

If the film were a bit more strange, a bit more shocking, it may have been better remembered, these three decades later. As it is, The Desert of the Tartars is an interesting, literary, and occasionally fascinating film; it has a peerless, professional sheen. Perhaps a little smudge here and there could have made it a masterpiece. Sometimes a director needs to get his hands dirty.
Gönderen Jeff zaman: 2:54 ÖS