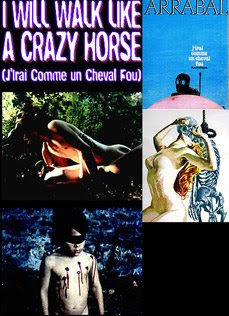 I earlier reviewed Fernando Arrabal's Viva La Muerte (1971), a film which I defined as "angry." Here is another film by anger (to borrow the byline used by Kenneth Anger). Arrabal, a founder of the Panic movement, seems determined to outdo fellow Panic artist Alejandro Jodorowsky's El Topo (1970) with a raging, nightmarish film on a similar theme. Like El Topo, I Will Walk Like a Crazy Horse focuses on the calamity that unfolds when a holy man from out of the desert comes face to face with corrupt civilization. In this case, the holy man is a dwarf, Marvel (Hachemi Marzouk), who is discovered by a fugitive, Aden Rey (George Shannon), wanted for the murder of his mother - as is explained in an amusing opening newsreel interpreted into sign language for those "deaf-mutes" in the audience. Our hero actually had an excruciatingly Oedipal relationship with his mother, which has left him an epileptic, as well as a basketcase tortured by grotesque daydream/reveries of his childhood. As in a Jodorowsky story, he is unable to escape the shadow of a parent, leaving him in a state of arrested development, a sharply-dressed man of society who secretly longs to dress in his mother's underwear and relive the traumas of his youth. (Those traumas, always revisited to the sound of galloping hooves, include witnessing his mother at the receiving end of a graphic cumshot during an S&M session with a lover.) Having fled the authorities into the desert, he finds Marvel eating sand and goatshit delicacies, a complete innocent who can float into the air and perform other minor miracles. Marvel also grows out one toenail, clipping it only once a year, to store it with his others in a sack. At one point, Aden sorts through the sack to count the toenails, as one might count the rings of a tree, only to find them far too numerous. (Marvel has also lost count, and suggests he might be 10,000 years old.) Determined to introduce his new best friend to civilization, he takes the dwarf and his pet goat to the city, where they rent an apartment together. Disconcerted that there is no soil indoors, Marvel has Aden assist him in transporting bags of dirt inside to construct a garden. Absurdist misadventures follow, as Aden introduces his friend to the modern world (and the authorities continue to pursue, always one step behind). He tries to bring Marvel a lover, introduces him to eating meat in restaurants (which repulses the dwarf), and takes him to church--where Marvel performs a genuine miracle of stigmata that gets him promptly kicked out. All the while themes of incest, repressed homosexuality, and social and religious satire emerge, leading to a climax about as bloody and as memorably repellant as the one which ended Viva La Muerte. Much more so than Jodorowsky, Arrabal seems hellbent on providing a cathartic transcendence through rolling about in the grand guignol.

Taboo imagery is Arrabal's cinematic language. An erect penis is lit like a candle - which is the least of the phallic violations on display. Aden and Marvel are depicted shitting (for real) in silhouette against a desert sunset. A flower's stem is stuck into a woman's ass, to emerge coated in shit and devoured (not for real). When two nude lovers in gas masks copulate, it seems almost like a refreshing reprieve - the kind of garden-variety surrealistic symbolism which Arrabal usually tries to stampede past on the way to more aggressive imagery. While the Panic movement was partly established as an anarchic response to the commercialized state of Surrealism (thanks, Dali), I Will Walk Like a Crazy Horse reminds one that Surrealism was originally intended as a weapon. This film is a weapon, perhaps more than it is a work of art, but as savage as it is, the film also feels less innovative and original than what was concurrently being created by artists such as Jodorowsky, Luis Buñuel, Pier Paolo Pasolini - even the stylish exploitations of Jesus Franco. Perhaps it is because many of the shocks seem pointless. Perhaps it is because the plot feels unoriginal, an imitation of El Topo or Simon of the Desert, but given a psychosexual twist.

Yet it is still undeniably a "film by anger," an exorcism of Arrabal's private demons. It is a product of a unique decade in which extreme transgression became, if briefly, not just a valid cinematic tool but also fashionable. I Will Walk Like a Crazy Horse still provokes outrage, which is certainly one of Arrabal's chief objectives. That it also provokes weariness, exhaustion, and even cynicism from this viewer is, perhaps, one of the unfortunate effects of witnessing an artist set on taking every concept to its extreme - and bloody, and scatalogical, and repulsive - ends. I liked Viva La Muerte. But perhaps I've now had my fill of this kind of exploration, and hunger for real poetry now, not just belabored gestures at symbolism from the mud and grime.
Gönderen Jeff zaman: 12:32 ÖS