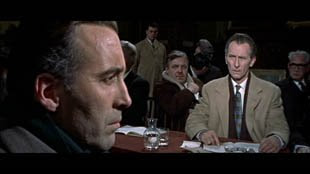 What a curious, wonderful find this film is, now finally available in a definitive presentation from Legend Films, which has given us the recent (unfortunately) colorized restorations of Ray Harryhausen's early films, but here has nothing to colorize, and so offers up the simple, perfect pleasure of a widescreen transfer of an oft-neglected, overlooked horror classic. Though it features many stock players of Hammer horror franchises (Peter Cushing, Christopher Lee, and Michael Gough, in particular), and is directed by Freddie Francis, veteran of many Hammer horrors, The Skull is actually a product of Hammer's chief competitor, Amicus, which is best known for producing anthology horror films like Torture Garden (1967) and Tales from the Crypt (1972). When I was in college, and watching Hammer movies voraciously--wondering why it had taken this horror fan so long to discover them--I would rent the Amicus films as a last resort (i.e. I couldn't find any Draculas or Frankensteins at the video store), and would derive modest pleasures from them. They often seemed like pale imitations of Hammer, featuring many of the players and directors, but with results that are choppy, garish, and considerably less handsome. (Although it should be noted that in Hammer's waning years, there wasn't much discernible difference between the studios.) The Skull is different. It's based on a short story by Robert Bloch, built upon the premise that the Marquis de Sade was possessed by an evil spirit, and that his skull still contains that spirit trapped within. Cushing plays a collector of occult items, who uses them in his research for books on demonology. Lee is his friendly rival. In the first proper scene in the story (after a pre-titles sequence in which we learn how the skull was first stolen from de Sade's corpse), the two Hammer superstars engage in a strangely obsessive bidding war over three Satanic statuettes, presided over by judge Michael Gough. This sequence alone should make the film a treasure for Hammer fans, and indeed is probably the best Hammer sequence never made by the studio; it also, being an auction of ancient and occult memorabilia, seems like an inspiration for an early scene in Guillermo del Toro's homage-laden Hellboy II: The Golden Army. Lee outbids his rival and wins the statues, though he's hard-pressed to explain to Cushing just why he wanted them so badly. Not a good sign. Later, Cushing is visited by Patrick Wymark (Repulsion, The Witchfinder General), who has two items which he thinks Cushing will want to buy--the first being a rare book on de Sade, the second being the man's very skull, for which he wants a thousand pounds. Of course, he can't very well prove it to be de Sade's skull, and he hopes that his own reputation will persuade Cushing; nevertheless, Cushing, though intrigued, refuses an immediate decision. Later, we learn that Wymark stole the skull from Lee, though Lee is only happy to be rid of it: he believes it was the skull which urged him to purchase the Satanic figures (for reasons unknown, but certainly sinister), and will now exert its unholy influence upon Cushing if he decides to take it. Of course, now that Cushing has been urged to stay away from the skull, his curiosity is piqued, and so begins an obsessive spiral which is one of the most peculiar and unique in the genre of British horror. Cushing, so often playing the most heroic of Hammer archetypes, here gets to sink his teeth (so to speak) into a more unsavory role. As his fascination with de Sade's skull grows, and his actions become more irrational and dangerous, he takes the viewer step-by-step through the man's unraveling--much more gradually and believably than, say, Jack Nicholson in The Shining. The film's long final stretch, almost set in real-time, is hypnotic, overpowering, almost claustrophobic, and beautifully illogical in the way nightmares are, in the way that the best Poe and Lovecraft stories are. Freddie Francis, always stylish but not always consistently good, here relishes the dreamlike quality of the story, and particularly indulges in the film's one actual dream sequence, which Tim Lucas rightly compares to Kafka's The Trial, but which also--in one drawn-out game of Russian Roulette--provides the kind of intense, sickening dread for which the horror genre is best suited. In Francis' most stylish and distinctive touch, several shots are taken from the point of view of the skull itself, as we gaze out of the skull's hollow sockets and the actors hit their marks so that they are perfectly framed--as though, somehow, the skull were arranging them like pieces on its chessboard. In several delirious moments, we are trapped in this POV as the skull actually pivots to follow them. All of this is most effective in a film in which so many of the Hammer horror clichés have been surgically removed, the plot stripped to its most archetypal players with all comic relief and other rote frivolities cast aside. The Skull gets straight to the heart of the matter, the heart of horror, but with the same stride as a sleepwalker grasping a knife in his sweaty fist.
Gönderen Jeff zaman: 9:18 ÖÖ Hiç yorum yok: