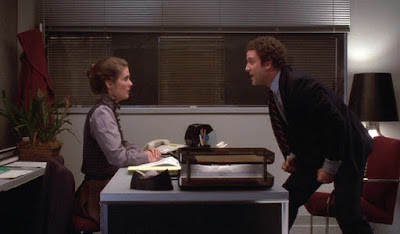 Albert Brooks is something of a lone albatross in American comedy for the past three decades; his films are razor-sharp, almost black comedies, but with a heart (and so appear, at first, to be less cynical than they really are). He's more populist than Woody Allen, but not a recognizable commercial name. Even when, in the first year of Saturday Night Live, he produced some brilliant, sardonic short films, he was booted off the show because he didn't fit into the SNL clique (shipping his shorts to NY from LA). Still, he's managed to--every few years--produce some very fine comedies, a handful of which approach masterpieces, and so his chief following is among film critics and film buffs. Lost in America is one of those near-masterpieces, perhaps his finest hour; and since I just found it for $2.99 in the discount bin at Pick 'N' Save, I'm writing about it here.

Brooks anticipated the Big Brother-style reality TV show craze with his satire Real Life (1979), in which he played "Albert Brooks" (much as in his shorts and in Looking for Comedy in the Muslim World, an arrogant send-up of himself), but in 1981 made his first great film, Modern Romance, in which his character cannot find happiness because he distrusts anything resembling contentment, and thus pathologically self-sabotages his relationships; somehow, the film comes across as more brutally self-analytical than Annie Hall, as Brooks dissects his protagonist's narcissism and pities anyone who would have the misfortune to fall for him. (I should mention it's also very funny.) Lost in America could be seen as taking this self-sabotaging character, here called David, into his 40's, having finally settled into a lifestyle, with a loving wife and a lucrative advertising career for which he's invested eight years. Anticipating a promotion, he buys a new home and toys with the idea of purchasing a luxury car; but when he's offered the "Ford account" in New York, and told that a younger, less experienced employee will be taking the promotion, he has an epic meltdown before his boss (a subtle shot suddenly reveals that his boss has been gripping a stress-ball through the entire conversation):

"I used to make fun of my friends in college who went out to 'find' themselves. I took the business route. So I end up here. I can't believe it. So what do I get? I get a transfer. After all these years, I get a transfer. I can get that at a bus stop, right now, I don't need any qualifications. Oh, by the way, our hairpiece secret is off."

After getting fired, he marches directly to his wife, Linda (Julie Hagerty), at work, channeling all of his frustration and crushing disappointment into a frenzy of euphoric inspiration: they're going to leave their jobs behind, sell everything, buy a motor home, and travel across America "just like 'Easy Rider.'" Never mind that this never happened in Easy Rider. Soon they're on the road in their motor home (a leather-clad man on a motorcycle pointedly flips the bird), and make a fateful stop in Vegas to get remarried. The chapel is closed, so they go to the Desert Inn and settle for the "junior honeymoon suite," which, impractically, has two small heart-shaped beds. While David sleeps--the beds pushed awkwardly together--Linda sneaks down to the casino for an all-night gambling spree. At 6 AM he stumbled into the casino in a bathrobe, only to find Linda playing roulette with the look of a strung-out heroin addict, perpetually putting chips on "twenty-two, twenty-two."

All of their life savings are gone, including the precious "nest egg." David goes to speak to the manager of the casino (Garry Marshall), who sympathetically offers to comp the room and breakfast. David has a better idea. Still wearing his bathrobe, he proceeds to make the biggest advertising pitch of his life.

"I'm going to tell you this idea now, and please, be secretive, because if another hotel hears about this, they'll take it. This is my business. As the boldest experiment in advertising history, you give us our money back... Think of the publicity. The Hilton hotel has these billboards all over Los Angeles with the winners of these slot machine jackpots; their faces are all over L.A., and I know that works. I've seen people in corners look up and say, 'Maybe I'll go to the Hilton.' Well, you give us our money back. I--I don't even know now, 'cause I'm just coming off the top of my head, but a visual where, if we have a billboard and the Desert Inn just handed us our money back. This gives the Desert Inn, really--Vegas is not associated with feeling."

The extended scene is the centerpiece of the film, and as David continues to pitch, and the manager continues to politely, but firmly, refuse him, the desperation seems to sweat out of the screen, until at last David is describing a Santa Claus/Vegas advertising campaign, and the manager replies, "We're finished talking." If ever Brooks touched greatness, this scene is probably it.

From there, events become slightly more predictible, and slightly less funny, although the performances of Brooks and Hagerty continue to shine, as they milk each moment for all its potential. The climax is a climax as only Brooks would stage it--understated and purely conceptual, and the natural endpoint of the satire: David, returning from his first day as a crossing guard, listens while Linda enthusiastically describes her day working as the assistant manager of a Wienerschnitzel, and then introduces her boss, a teenager. A more hopeful coda is then applied, but tempered by Brooks' cynicism: they return to the lives they had, having been permanently warned off the pursuit of happiness.

One imagines that if Brooks had been able to make a series with these characters, and Hollywood had that to offer in the 80's rather than Chevy Chase vehicles, the world at large might be a better place. Still, most recently he produced Looking for Comedy in the Muslim World (2005), surely one of that year's most underrated (and underseen) comedies, whose plot suggests that even post-9/11, societies of all persuasions can unite under a solitary cause (in the case of that film, the cause is not liking the comedy of Albert Brooks). Yet who could dislike Lost in America, or any film which features this exchange:

"Phil Shabano, the unqualified son of a bitch! Why? I'll tell you why, because life isn't fair. But you know what'll happen? It'll balance out. He'll buy that boat I've had to look at in that stupid catalog for three years and he'll crash in Catalina and die and seals will eat him."

"So what? I'm just telling what might be. Fine, he won't die, and he won't be eaten, but he'll never find his way back to the mainland."
Gönderen Jeff zaman: 3:57 ÖS Hiç yorum yok: