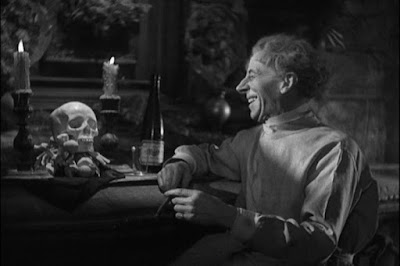 Criteria (Defining a “Horror Film”):
I. Terror Vs. Horror

Some critics have made a peculiar distinction between the “terror” film and the “horror” film. Presumably terror is interested in generating a visceral tension and reaction, whereas horror is to leave you aghast. To me the distinction is academic; in general usage, both are given the umbrella label “horror,” and both will be included here. However...

...there is a “thriller” genre which is often distinct from the “horror” genre. For example, crime thrillers starring Ashley Judd hunting down serial killers would not be included in the “horror” genre. However, Silence of the Lambs and the other Hannibal the Cannibal films are typically included in the horror genre, perhaps because of the focus on the more grand guignol aspects of the story. Because Silence of the Lambs is so often included in “Best of Horror” lists, I decided to leave it eligible for this list; the fact that it didn’t make the list has more to do with my personal taste and the greater enjoyment I have for the films that are included. But then, it seems to me contradictory that David Fincher’s seminal Se7en is often excluded from horror lists. Is it because the villain spends much of the film off-screen, the story focusing instead on the hunt for him? The distinction between “thriller” and “horror” is still very intangible. Alfred Hitchcock is the master of the “thriller,” but most of his films are not considered horror, with three notable exceptions: Psycho, The Birds, and Frenzy. I considered these films eligible because of the contributions they made to the horror genre in general. There also needs to be, I think, a focus on the murder rather than the investigation. This distinguishes it from a standard mystery. An Agatha Christie mystery might feature a horrific crime, but the “whodunit” aspect is given greater prominence. In a horror film, the murders are given prominence, with the intention of generating a feeling of fear and personal jeopardy in the viewer. In the case of Se7en, I excluded it because it would open the doors to including a number of suspense films more tenuously connected to the horror genre, despite the fact that there is a significant horror aspect to the film: Fincher models his storyline on Dante’s Inferno, a tour through a modern urban Hell. On a different day, in a different mood, I might have included it; on the other hand, when I look at the list I compiled, it seems to strike more closely at what “horror movies” are about.

I quickly realized the major problem in compiling a list of the greatest horror films ever made: defining “great.” Does it mean the most famous? The most influential? The most scary? Frankenstein (1931), for example, is not frightening. Its horror seems quaint. But this is because the film has aged; there is no such thing as a “timeless” film, although sometimes we’d like to think so. Everything is of its time in a fundamental way. We are told that Frankenstein, when it was first released, caused theater patrons to scream and faint. It also provided an iconic template for Mary Shelley’s story, to the point that if you asked a contemporary child to draw a picture of Frankenstein’s monster, he or she would place bolts in the neck. Naturally, this is one of the “greatest” horror films, even though it may not be as scary to a modern viewer as a Saw sequel. There are less important “great” horror films that pre-date modern horror, of course, and you’ll see dollops of them on this list. I have a great love for Hammer horror, Universal classics, and Val Lewton movies. Not every one of these movies may be as vividly remembered, and they may no longer be “scary,” but they are nevertheless sterling examples of the genre. Also note that a horror film does not have to be “scary” to be effective. A prevailing since of dread, or, to a lesser degree, a Gothic atmosphere, a creepiness, or a morbid focus on death and dismemberment (such as the Frankenstein films) all can make for an effective horror film. A final problem might be an influential horror film which is not very good. Now we enter the realm of Herschell Gordon Lewis (the godfather of gore). Frankly, I wasn’t interested in including films that I didn’t think had an inherent quality beyond simply being remembered as being the “first” to do something. All the films on this list are worth watching. “Great” means that something isn’t just important, but is better than good.

This is a simple matter of ratios. If the film is mostly comedy, it is ineligible; if it is mostly horror, it is eligible. Abbott and Costello Meet Frankenstein is a comedy that uses Dracula, Frankenstein, and the Wolf Man as punchlines. An American Werewolf in London, on the other hand, is, as Leonard Maltin’s Movie & Video Guide puts it, “not a spoof, but a full-blooded horror film that happens to have a sharp sense of humor.” Following strict adherence to this guideline, it is with great regret that I had to exclude Roman Polanski’s Dance of the Vampires (The Fearless Vampire Killers), despite the fact that it is a better Hammer horror movie than most actual Hammer horror movies.

On one end of the “monster movie” spectrum strides Godzilla, King Kong, and the Beast from 20,000 Fathoms: giant monsters that terrorize cities and squash civilians between their toes. At the other end, there’s the immediacy and body-horror dread of Ridley Scott’s Alien or David Cronenberg’s Shivers. And somewhere in between is Jaws. It’s easy to classify monster movies featuring vampires and werewolves as horror—they’ve become synonymous—but it’s considerably more challenging to find room for Godzilla and company, since it would then allow for all the atom-age monster films like Them and maybe even The Incredible Shrinking Man. I’ll admit there is no good solution, as the genres have become inextricably linked: if you need a good monster to terrorize people, outer space or atomic radiation is as good an explanation as any. The recent Slither, for example, has a science fiction basis (the parasitic creature is an alien from another planet), but few would dispute that the film, with its focus on body mutations and grisliness, is a horror film. My decisions here are subjective and tailored to the design of this list. I have excluded atom-age monster movies as I think that’s a subgenre best given over to science fiction. Since that means no Godzilla, I have excluded all giant monster movies in general (no King Kong). These films were more about spectacle anyway. But I have included Invasion of the Body Snatchers, a film whose basic premise—the enemy may have taken over the minds and bodies of your friends and neighbors—has been exploited to great effect in horror films. Again, if the film was meant to generate unease, dread, or frights, it belongs in the category of horror. However, I have been careful to not go overboard with including films containing strong science fiction elements. It just so happens that many of the greatest horror films are also among the greatest science fiction films, reminding us that, in genre storytelling, fear is just another facet of fantasy.

Finally, this list will be updated and rearranged as I see more films and/or change my mind about the order.